Remapp the inputs and outputs of a program via a visualization.

Brought to you by: ingo, mlamp, robert
Unlicense 89 Views

With the IEC library "IO Mapping Tool", the inputs and outputs of a program can be
remapped via a visualization in runtime mode.

In the function blocks IOMappingBool, IOMappingByte, and IOMappingWord, eight variables
each of the corresponding type are used for the inputs and outputs.

In the function blocks IOMappingBaseFB and VarIOMappingBaseFB, an array of integer values is
created for each. The indices of the array represent the inputs and the values at the corresponding
positions represent the outputs for these inputs. Only one input can ever point to an output.
When changing the mapping of inputs and outputs, it is checked if the output has already been mapped to an input.
If this is the case, then the value of the earlier input is set to -1.
The array that saves the mapping of inputs to outputs is stored with the PersistenceManager.

The package contains the library "IO Mapping Tool" and the sample project "IOMappingExample.project".

The eight inputs and outputs in the visualization IOMappingVisu are each represented by eight radio buttons.
When a radio button is selected on the left side, the corresponding output is selected automatically on the
right side. By default, the outputs are ordered according to the inputs. After changing the mapping, the new
mapping is saved by clicking the "Set" button. Clicking the "Reset" button discards all changes after the last save.

The "Set" and "Reset" buttons function in the same way as for IOMappingVisu.

The sample project "IOMappingExample" demonstrates how to use the function blocks IOMappingBoolFB and
VarIOMappingBoolFB. the mapping of values is saved by means of the PersistenceManager.
For this purpose, the library AC_Persistence has to be linked in the POU pool and added as a module
instance (see also: "Persistence Manager" in the CODESYS help). 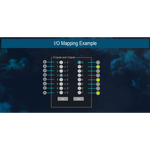 Visualization with eight inputs and outputs 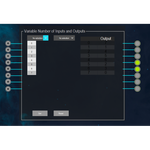 Visualization for a variable number of inputs and outputs