This example shows how object oriented programming can be used.

This example shows how object oriented programming can be used. It shows the implementation of
a building with different rooms. The visualization is used for a better demonstration.

ILight: Interface for setting and getting the light value.

IRoom: Interface for doing some operations, when the daytime or nighttime comes up.

ITemp: Interface for setting and getting the temperature.

RoomType2: This function block extends RoomType1 and inherits all methods. The method "SetLight"
is overridden, and extended for the additional light.

RoomType3: This function block extends RoomType2 and additionally implements the ITemp interface.
The methods "Operation_Daytime" and "Operation_Nighttime" are overridden and extended with the temperature.

CheckFB: Checks the time of the day. Each time period lasts five seconds.

BuildingManager: Depending on the time of day, the corresponding operations are done. Additionally a
conversion from the ITemp interface to the function block of RoomType3 is done with the function
"__QUERYINTERFACE".

Visualization: Displays eight rooms of three different types. The light bulbs are switched on at daytime
and switched off at nighttime. Two rooms also show the temperature. This value determines the size and color
of the bar. 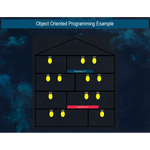